I’ve probably made half a dozen different versions of a salmon cake or salmon patty over the years. All of the recipes have been tasty, and they usually get eaten, but they’ve all been a little too complicated to make it into our “quick weeknight dinner” rotation.

After reading that canned salmon with bones is one of the most calcium rich foods you can eat, I decided I needed to find a way to get more of it into her diet. (If you’re thinking “ewwww” about the bones, note that the tiny bones in canned salmon are really soft, and when they’re mashed up with the rest of the ingredients they are totally edible, and you don’t even notice they’re there. Promise.)

My first goal was to come up with a recipe that would taste good and be simple enough to whip up on a busy weeknight.

You can’t get much simpler than that, right? You only need four ingredients for this recipe:

I’ve always liked salmon patty recipes that included potatoes, but since peeling and boiling and mashing a bunch of potatoes is a pain, I decided to use frozen hash browns instead.

My second goal was to incorporate some greens so that it could be a “one stop shopping” sort of meal, and I wouldn’t even need to bother with a separate veggie side dish. So I threw in some chopped frozen spinach.

Finally, I used eggs as a binding agent. I seasoned it all with a little salt and pepper, and in less than 20 minutes from start to finish we had a nutritious and delicious dinner on the table!

My girls devoured these (and even asked for leftovers the next night), so you know they must taste good.

The spinach and hash browns need to be thawed before you make the salmon cakes, so either put them in the fridge the night before, or thaw them on the countertop a few hours before you plan to cook.

Make sure you do a good job of squeezing the water out of the salmon and the spinach so that the patties don’t fall apart while they’re cooking. Saute the patties in an oil-coated pan over medium heat for 5 minutes per side, or until golden on the outside.

Besides being quick, good, and simple, this canned salmon patty recipe is a winner because you can stock the salmon, hash browns, and spinach in your freezer / pantry so you’ll always have a go-to meal ready to be made on nights when you’re unmotivated to head to the store. 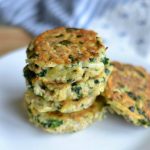 Depending on the brand of frozen hash browns that you use, you may need to add more or less salt than recommended. Some frozen hash browns are pre-seasoned while others are not. The best way to make sure you’ve got the right amount is to make a small test patty before you cook the whole batch.