Sometimes life is just plain overwhelming. But if you’re feeling overwhelmed on a regular basis, you might benefit from this simple mindset shift. You can end your day feeling accomplished instead of defeated, and it has nothing to do with how much you’re actually doing!

I recently read an interesting post from Rosemarie Groner of TheBusyBudgeter.com, titled “One Weird Trick I Use to Stay Under Budget Every Month.”

As soon as I saw the title, I knew it was something I had to read. I’ve been budgeting my family’s finances for years, and while I think I do a decent job, I am notorious for always going at least a little bit over budget. I’ll roll extra expenses from one month into the next, hoping that I’ll make up for it by spending less that month. That never happens. The cycle just continues.

After reading Rosemarie’s post, I realized that while my “rollover” approach might make me feel better in the moment, it’s actually setting me up for failure. I’m starting each new month with a defeated attitude toward our finances, knowing I’m going to have to cut a lot of corners to stay on track. And when I impose strict limits, it’s inevitable that I’ll overspend again.

The “weird” trick she suggests is to set your for more than you think you need. The psychological effect of knowing you have a cushion will actually inspire you to save, so you end up under budget. I agree that the tip did seem unusual at first, but I’ve been putting it into practice this past month, and I’ve noticed a positive change in my mindset and in my budget! Our minds are strange little things, aren’t they?

As I thought about this tactic more, I realized that I could apply the same way of thinking to my daily “to do” list.

I decided to start treating my time in the same way I’ve been treating my budget: as something of abundance instead of scarcity. And instead of setting myself up to fail, I set myself up for success each and every day. Here’s how.

How to Stop Feeling Overwhelmed:

I used to create a monstrous daily “to do” list and just work my way through it each day, adding, crossing off, and re-prioritizing as needed. No matter how much I got done on a given day, there was always more “to do.” At no point did I ever feel like I was done with my list or that I’d accomplished everything I wanted to accomplish. Just like my budget, I would rollover my tasks from one day to the next, and the next, and the next.

To stop this insanity, I decided that instead of referring to my long list of “to do’s” each day, I would create one daily list that only has 3 THINGS on it. That doesn’t mean those are the only things I’ll do that day, but those are the three things I’m making it a priority to accomplish.

The key is making sure that all three things are COMPLETELY DOABLE in the amount of time I have. I don’t choose super simple things (brushing teeth, checking mail, getting gas, etc), but rather I select three things that will give me a sense of accomplishment. Usually at least one is related to blogging, one is related to housework, and one might be a major errand or something I need to do outside of the house.

I still keep an ongoing master list of “to do’s” but I only refer to that list after I’ve completed the three things on my daily list.

When you’re choosing which three things to put on your list, one important thing to do is to get specific. Don’t just put “laundry.” Instead, think about how much laundry you can reasonably accomplish while leaving adequate time for the other two things on your list; for instance: “Wash, fold, and put away one load of t-shirts and socks.”

If you have something on your list that’s part of a larger project, write out specifically how much of the project you want to accomplish that day, or how much time you want to dedicate. This could be done for a work-related project or things around the house; for instance:

First, narrowing my list down to my “Daily 3” helps me to stay focused. When I was dealing with a longer list, I would often jump from item to item, and many things would only get halfway done on a given day. For instance, I’d throw laundry in the washer, but forget to put it in the dryer. Or I’d start to write a blog post and then stop in the middle because I noticed the floor was dirty and I wanted to vacuum.

It’s also completely changed my mindset about my level of productiveness. Instead of feeling like a failure at the end of each day because I’m focusing on what I didn’t get done, I actually have a sense of accomplishment. When I get up in the morning, I look forward to creating my “to do” list because I know those things will get done.

If I tackle some of the things on my master list after completing my three things, I feel like I got more done than I needed to instead of feeling like I only achieved a small portion of what I wanted to do.

As I said, our minds are indeed strange little things, but it’s inspiring to know what a simple shift in approach can do. If you’re feeling overwhelmed by your long list of “to do’s,” please try this method out, and let me know how it works for you!

PS: You can print out your own free version of the “Things To Do” list in the photo, which is from “A Pair of Pears.” 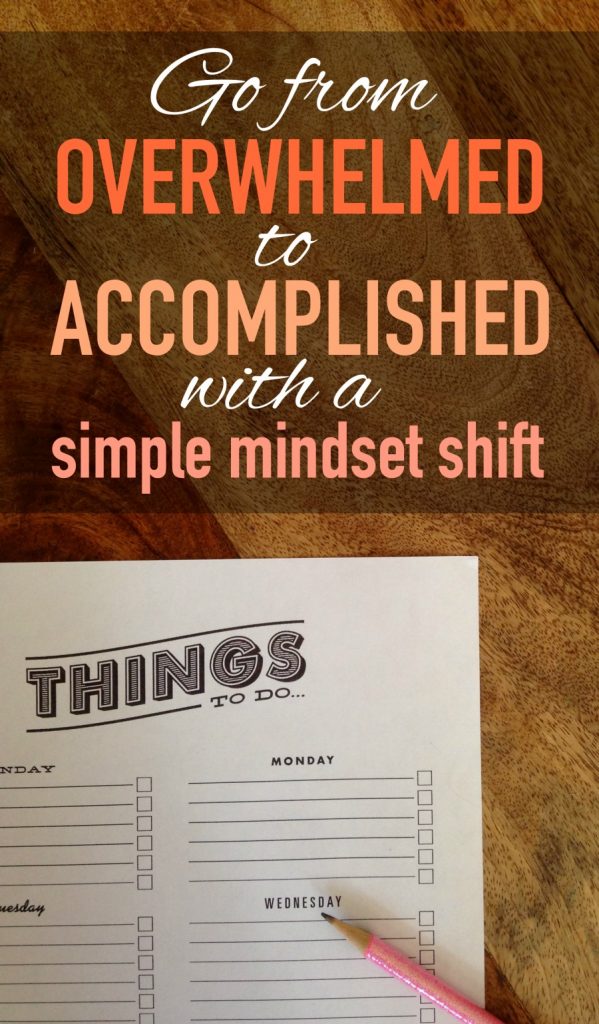 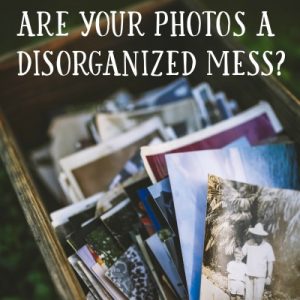 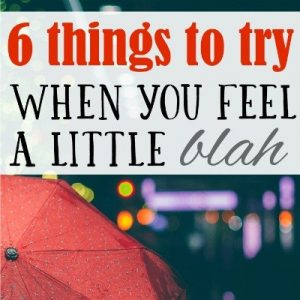 6 Things to Try When You Feel a Little “Blah”