Chopped brussels sprouts are combined with bacon, arugula, and a tangy lemon vinaigrette for a fantastic side dish. This is a great holiday side dish, but it’s perfect for a weeknight side dish as well.

I’ve now become a complete brussels sprout convert, and even consider them one of my favorite vegetables.

I think my initial dislike stemmed from the fact that the only brussels sprouts I tasted as a kid were boiled. Boiled brussels sprouts are like stinky, greenish-brownish, mushy balls of sadness.

When I had the opportunity to try them roasted, sauteed, and fried, the clouds parted and I could finally see the brussels sprout light.

I’ve made brussels sprouts a few different ways over the years, but this shredded brussels sprouts salad preparation is my favorite. It works perfectly as a side dish or as a main dish (especially if you add a little grilled chicken on top).

One reason I love making it for a dinner party or holiday meal because it’s a lot lighter than many typical brussels sprouts side dishes, which often involve drenching the vegetables in butter, cheese, and other decadent ingredients.

Plus, because it’s a room temperature side dish, it’s one less thing you need worry about keeping hot during those frantic final minutes when you’re trying to get all of your food onto the table!

You can use store-bought dressing if you don’t want to make your own, but even if you do make the homemade vinaigrette, this salad can be whipped up in minutes.

When you chop up the brussels sprouts and give them a light saute, they retain a fantastic crunch and turn a beautiful shade of bright green.

Adding salad greens (arugula is my personal favorite) boosts the freshness and flavor, while the addition of bacon gives it that little bit of decadence and texture that makes it completely delicious.

If you’re looking for a side dish that’s quick, healthy, and a crowd pleaser, you need to add this one to your menu. And you might just convert even the staunchest brussels sprouts hater at the table. 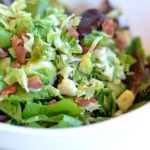 For vinaigrette: Combine ingredients in a bowl and whisk until combined.